The PC gaming market represents a critical proving ground for new technologies. Tobii believes that integrating eye tracking features into games is an important prerequisite for increasing consumer demand for eye tracking hardware and technology. Over the last few years, Tobii has partnered with dozens of game designers and development studios to enhance many of the leading games with eye tracking integrations.

At the beginning of the year, Tobii announced that it expected to grow from 45 to 100 games with eye tracking features in late 2017, including several AAA blockbuster titles. Throughout 2017, Tobii collaborated with game studios to add eye tracking support to over 55 new games, exceeding the 100-game milestone in November.Among the major games that have been published or launched are Assassin's Creed Origins, F1 2017, Agents of Mayhem, Rise of the Tomb Raider, Watch Dogs 2, The Hunter: Call of the Wild, Deus Ex: Mankind Divided, and Steep.

“While the total number of supported games is impressive, it is even more important to note that Tobii eye tracking has been incorporated into a broad range of game genres, from simulations to RPGs, from shooters to adventure titles,” said Oscar Werner, President Tobii Tech. “The fact that so many studios, working across many genres, have integrated our technology into their games is powerful evidence for the compelling user benefits that come from enhancing games with eye tracking.”

With over 100 games supporting eye tracking, Tobii’s work to enhance games is just getting started.

“It is important to have a continuous influx of great games, improved features, and new development partners. We also are perpetually looking for new categories of games to enhance with eye tracking features and tools. Going forward, our efforts aim to not only add great immersive features in PC games but also add new exciting e-sports analytics capabilities and experiences in Virtual Reality,” commented Oscar Werner. 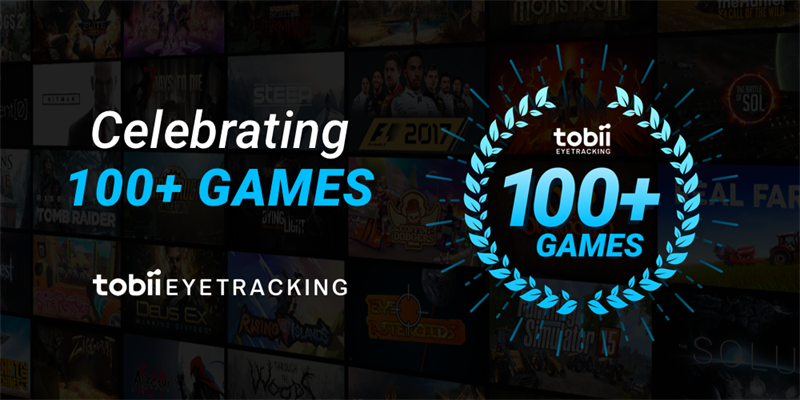 Tobii is the global leader in eye tracking. Our vision is a world where all technology works in harmony with natural human behavior. Tobii operates through three business units: Tobii Dynavox makes specially designed computers that are controlled by eye movement or touch screens for use by people with special needs due to spinal cord injuries, CP, ALS or other medical conditions. Tobii Pro develops and sells eye-tracking equipment and services used today by more than 3,000 companies and 2,000 research institutions, including all of the world’s 50 highest ranked universities. Tobii Tech further develops Tobii’s technology for new volume markets, such as computer games, personal computers, virtual reality and vehicles. Tobii is headquartered in Sweden and is listed on Nasdaq Stockholm (TOBII). The group has around 700 employees. For more information, please visit www.tobii.com.