STOCKHOLM, October 16, 2013 - Tobii Technology, the global leader in eye tracking, is climbing the Universum ranking of Sweden’s most attractive employers. The highest ranking Tobii received is among students in Engineering Physics and Media Technology at the Royal Technical Institute in Stockholm (KTH) with a seventh place position.

“The results speak for themselves: KTH is an important recruitment base for Tobii and we work closely with several programs, providing expert lecturers and offer a large number of thesis projects to students each year. Similar initiatives exist in other universities and colleges, and this is definitely something we intend to focus more on in order to broaden our recruiting base, says Sara Hyléen,” marketing director at Tobii.

Tobii was recently named as Europe’s most innovative company and in the Universum survey Tobii is also the company that gets the most spontaneous associations with innovation, second only to Google. Tobii has developed eye tracking solutions that gives people with disabilities access to computers, wearable systems for market research and is now focusing on bringing eye tracking to everyday applications, such as PCs and tablets.

“The Universum survey positively reflects what Tobii is appreciated for among its staff. A recent employee survey shows that many Tobii employees feel they are part of creating the future. Tobii has many development projects adjacent to research and working with cutting edge technology which is extremely exciting,” says Sara Hyléen. 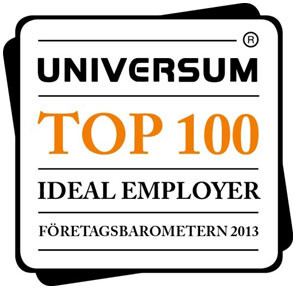