STOCKHOLM, SWEDEN October 15th, 2015 — Tobii Dynavox, the market leader in eye tracking and communication solutions for individuals with disabilities, announced today the European launch of the T-Series. The series consists of the T10 and T15, two touch-based speech-generating devices that give a voice to individuals with conditions such as aphasia, autism, cerebral palsy, cortical visual impairment, early ALS, locked-in syndrome and stroke communicate.

“The T-Series has been hugely successful in the U.S., enabling individuals with speech impairments to communicate verbally. And in doing so, helping them to lead richer and more independent lives. Through the recent merger of Tobii and Dynavox, we are now able to bring the same opportunities to users in Europe. This launch is a testament to our newly combined strengths”, says Fredrik Ruben, president of Tobii Dynavox.

Purpose-built for speech-generation, every feature of the T-Series has been carefully considered to provide quick, simple communication and ease of use. The devices combine a vibrant display with high-contrast PCS symbols to enhance clarity and target size for those with visual limitations such as cortical visual impairment. Both the T10 and T15 support multiple access methods including a capacitive touch screen and customized on-screen keyboards, allowing users to communicate through touch, scanning and head mouse input. The T15, which is targeted at users who require larger letters or symbols and desire a mounted device, offers fully integrated switch ports, a full-sized USB port, and Infrared access. The T10, which is extremely portable and designed to be easily carried, also offers those access options via an accessory.

Compass, the innovative and research-based software that ships with T-Series devices, features a variety of pagesets and comprehensive communication tools that makes personalization easy. And, thanks to the added power of the free personal myDynaVox account, you are provided with the ability to seamlessly connect and share content among family members, members of the support team and other users, as well as the ability to back up and restore your personal communication content.

The T-Series is available in Europe, Australia, New Zealand and South Africa through the Tobii Dynavox reseller network. 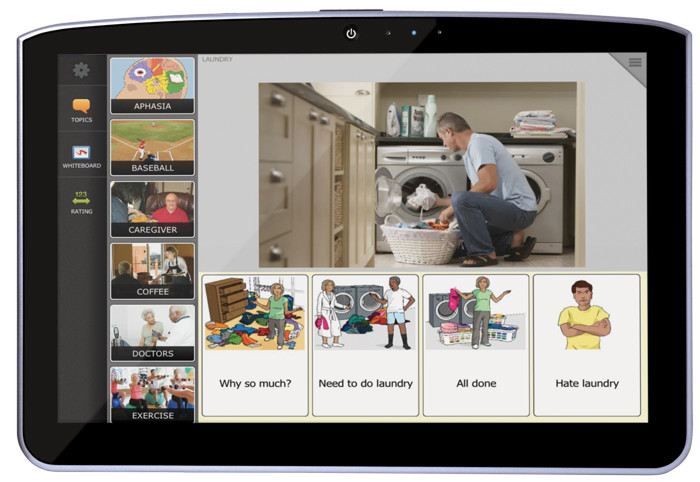